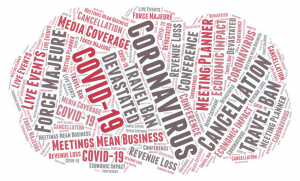 Many people wonder why meeting planners are consistently rated in the top 5 most stressful jobs lists. It can definitely be argued that first responders, doctors, military personnel, nurses, etc. all have more difficult jobs, and as a planner myself, I wouldn't disagree with you. It is a stressful job for sure, but we are very aware that we are not in the business of saving lives. While planners are not likely to be putting out literal fires, they certainly have their own fires to put out throughout the entire planning process and onsite. Planners are meticulous and focused on the details. As the primary point of contact for countless vendors, they must be prepared to handle or delegate any situation that arises. The event may be a once-in-a-lifetime program or a primary revenue source for the organization, adding to the pressure to make everything perfect. It takes a great deal of organization, multi-tasking, time management, budget oversight, staff wrangling, vendor connections, and communication to pull off an event. All these tasks often occurring within a 30-minute period.

Consider for a moment the following scenario -

You are three weeks out from your annual conference. You've spent a year working on every detail. Selecting design elements to perfectly complement the event location, coordinating the faculty and the agenda, and overall event aesthetic. You've negotiated and established relationships with countless vendors and contractors. Made at least 3 trips to the venue to ensure the layout and flow would be perfect for your event to make the experience easy on attendees and keep them wanting to come back next year for more. Sure, the normal stressors pop up along the way - the venue notifies you that they double booked one of your primary breakout conference spaces, so you'll have to move to a different room. Never mind that your signs and program have already been designed, so you'll have to make changes on those items. This is all par for the course and what makes planning exciting. Being ready for the unexpected, creative and critical thinking when the inevitable problems occur. We power through and come out triumphant.

END_OF_DOCUMENT_TOKEN_TO_BE_REPLACED

Airmen may see faster apps and a new way to learn about cyber and coding in the near future, according to the Air Force's deputy chief information officer.

The Air Force is preparing to invest in what it's calling Digital U, an online schoolhouse similar to Udemy or Codecademy that will let airmen learn basic cyber skills or challenge themselves to learn coding languages.

"Digital U is embedded in every single mission area if you're an HR professional or a logistician," Bill Marion, Air Force deputy CIO told Federal News Network in an interview. "We wanted to break the norm and truly democratize the training. This is where online and live media training can help you get to scale."

Marion said with about 700,000 active, reserve and guard airmen, giving them all cyber training in a classroom is not feasible.

Digital U uses commercial technology to bring training to airmen.

The training will cover everything from basic cyber hygiene to something as complex as making codes. The Air Force plans to gamify the training process, allowing airmen to level up and earn badges, to incentivize them to continue learning.

"We want them to be able to do advanced analytics and write a basic algorithm that goes against a dataset that they may know natively," Marion said. "If I'm a flight line technician, the tools can help me with fuel flow. How much money can we save by saving 1% of fuel when we are the world's largest fuel consumer? We can make some very significant moves by an airman knowing how to write a basic query on a dataset."

Marion said the Air Force hopes to eventually recruit, retain and even incentivize airmen with bonuses through Digital U.

The online classes let airmen take education into their own hands and learn as much as they want, even taking steps to becoming a data scientist.

The Air Force plans to contract the program out using other transaction authority (OTA) -- an acquisition method geared toward fast procurement with nontraditional defense companies.

"It's not just a one-size-fits-all," Marion said. "There's differing vendors in this space that provide everything from much lower point, but every entry-level training, to some vendors with a little higher price point, but more advanced training. The OTA is allowing us to look at how much we throttle on the lower end, the upper end and in the middle so we can scale at the 700,000 airmen level. It will not be a one-vendor thing based on our market research. It will be an ecosystem of tools."

While the Air Force is priming its airmen for more digital engagement, it's also trying to make their current experience with the digital world less of a pain.

Marion admitted the way the Air Force goes about cybersecurity is redundant and slow.

"We've layered so much security that the user experience is down," he said. "We need to get that down to the right number of layers. There is security there that should be baked in there, but we've done it three, four, five times. I joke that once I've scanned for a social security number; I don't need to scan another time, another time and another time in the same transaction and we are doing that in some cases."

The Air Force is looking at the apps that its airmen use and testing how long it takes to access apps, and how many clicks it takes to complete an action.

For example, Amazon has one-click buying, something customers find convenient -- and possibly dangerous. Some airmen are finding they need to click 48 times to complete an action. Marion is looking into both the access and clicks issue.

Outside of that, the Air Force is moving more toward a zero-trust model -- that's where an organization never trusts a device connecting to a network and always requires verification.

Marion said that involves the Air Force retooling its applications inside a native cloud environment.

"We've done that with a couple dozen applications, we've got a ways to go with others," Marion said.

The education, cybersecurity and ease of use are all part of the service's Digital Air Force plan it announced in August. The plan is supposed to unfetter the force from an industrialized way of thinking, open itself to faster networks, better weapons systems and make the service a more attractive employer.

View the full article by Scott Maucione at FederalNewsNetwork.com: https://federalnewsnetwork.com/air-force/2019/12/air-force-announces-new-ways-of-learning-digital-skills-working-on-faster-apps/?fbclid=IwAR0It1bj3v8GGBBGkgSSCvbJPlkIk1gU1QNutJJP8JIskdTEH_mpZzyeo5A

From time to time GovEvents will come across information we feel our members and audience would benefit from. Here's something we wanted to share from Bob Gourley, Founder and CTO at Crucial Point LLC:

For the last decade enterprise architects have all known the importance of engineering continuous connectivity to cloud services. If you want to use the cloud you have to have a path to it.

For parts of the enterprise who may operate at the edge, where connectivity can be an issue, it has been hard to design solutions leveraging public clouds. Depending on the organization, edge users might have some mix of public cloud, private cloud, datacenter access and local compute, all complex and hardly optimized at all. END_OF_DOCUMENT_TOKEN_TO_BE_REPLACED

As a government employee, you may have heard about Continuing Professional Education (CPE) credits and possibly aren't quite clear on what they are or why they matter. GovLoop also offers CPE credit on our online and in-person trainings, so we wanted to take a moment to explain what these credits are, who is behind the accreditation and why CPEs might be valuable to you and your career in government.

Continuing professional education (CPE) credits are made available through the National Association of State Boards of Accountancy (NASBA). For an organization to offer CPEs, they must complete a rigorous process of certification and become a member of the National Registry of CPE Sponsors. END_OF_DOCUMENT_TOKEN_TO_BE_REPLACED 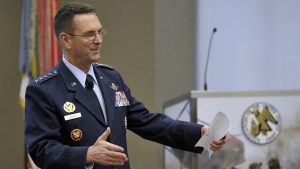 As some Army National Guard soldiers begin training under a new system that increases the number of days on the range, the chief of the National Guard Bureau predicts "some changes" if the greater demands are not sustainable over the next few years.

In remarks at a March 12 forum hosted by the Association of the U.S. Army's Institute of Land Warfare, Air Force Gen. Joseph L. Lengyel said the Sustainable Readiness Model put in place in fiscal 2017 as a means of reaching a higher level of readiness across all components makes higher training demands on reserve forces. It may not be sustainable for individual soldiers whose "civilian lives won't be able to tolerate it," he said. "I predict there will be some changes."

"Those heavy brigades are going to do 39 days one year, 48 days next year, 60 days in that third year and to sustain that readiness they're going to do 51 days the following year," Lengyel said. "That's a lot of training days. A lot of days." END_OF_DOCUMENT_TOKEN_TO_BE_REPLACED